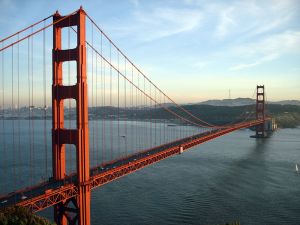 I consider myself a world’s citizen. Being an immigrants daughter I’m not too attached to any place. But because I live in Pamplona Spain, I guess my farthest travel from home was the one I made from here to San Francisco California, to work as a foreign correspondent in the late nineties. But San Francisco was my home for several years, so I can say that my travel back to Pamplona was also the farthest.

The first one was to the unknown, the second to the already known. In the first one I had to deal with a new language, a new way of life, a new way of work outside the newsroom, by myself, in my home office, not knowing the local uses. All was new an exciting. The second one was to come back to the old and very known routines.

I had six months of training in New York (so exciting city) before packing my bags and flying to the West Coast. I couldn’t believe my boss when he said to me that they needed people in the West Coast because other correspondents thought it was too far away from home. There was a correspondent in LA and that was it. I was going to report about the Bay Area (including Silicon Valley). A very interesting stuff in the nineties.

I remember two feelings: one was a sense of space to breathe and a gorgeous nature I could enjoy everyday without leaving the city (I loved to take a walk in the evening to the Ocean Beach and watch the pelicans flight). The other was a sense of freedom. Nobody cared why my surname was “different” as it happened often in my city, because I was in the land of immigrants and their names come from different places of the world. I felt accepted from the beginning. So, no problem with my name, a lot of freedom, a gorgeous place, a lovely city with so many things to discover every day, the whole Bay Area to search for news and my nearest boss in Washington DC, East Coast. What more could I ask for?

I remember my first day in the city, vice president Al Gore came and had a press conference and I had to go. It was my first experience with a first-class nation personality and I was impressed how effective and quick were security controlling journalists. I thought they would not allow me enter the place being a newcomer despite my credentials, but they did!. Something unthinkable for me coming from Spain where this kind of things were going back then so tediously and slowly. After that I attended at least two events with president Clinton. Very interesting city for a foreign journalist in those days.

PS: I also saw negative things but this is not the place and the moment to tell about them I think. I tried to help working in a non-profit initiative with some American friends. A drop of water in the desert maybe, but a drop of water at least.